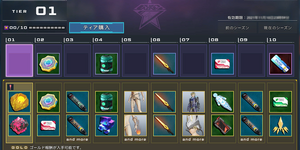 A screenshot of the Mission Pass tracks, with the regular track on top, and Gold track on bottom

Mission Pass is a reoccurring feature from Phantasy Star Online 2, where players can complete tasks to earn deluxe items. By completing Tier Missions, players are able to level up their Mission Pass and collect rewards respective to their current Mission Pass tier.

Tiers can be purchased at a rate of

Before Season 15, there were 35 Tiers - with 30 visible before unlocking Tier 30. After Tier 30 was unlocked, tiers Tiers 31 to 35 would become visible as part of the "Overrun".

N-Mission Gold Pass can be used during a Mission Pass Season to access Gold rewards, which can be purchased from the SG Shop for a total of

100. If a Premium Set is active during the start of a new Season, then the Gold rewards will be automatically accessible.

When a new Season starts, the previous season's earned rewards remain accessible from the previous Season tab. Be sure to collect these rewards before they are lost if you have yet to do so.

After a Mission Pass Season expires, it will remain accessible from the Past Season button. When a new Season starts, the previous past Season will disappear.