An example of a popup when a Trial starts

A Trial (also known as Emergency Trial or E-Trial) is an interrupt event that occurs suddenly in exploration sectors and combat sectors. These are indicated with "T" markers, which are visible from any part of the sector you are currently in.

Trials will task you with an objective, ranging from defeating a certain amount of enemies or a boss, to defending a transport truck or retrieving a Stella Gift. When a Trial is completed, you are awarded with

Defeating enemies not associated with another Trial - including Tames, can potentially cause an Trial to start elsewhere in the sector.

In Combat Sectors, completing a Trial while the PSE meter is at level 4 will usually trigger a PSE Burst.

On occasion, two Trials can occur at the same location. The objectives for these two Trials are tracked separately and each reward their own

A boosted Trial's popup, which is colored red instead of gray

On rare occasions, Trials can have an increased difficulty. When these occur, the Trial Start popup is colored red instead of its usual gray colour.

Certain hazards that normally do not appear will spawn in these Trials, such as Bee Hives that shoot projectiles. 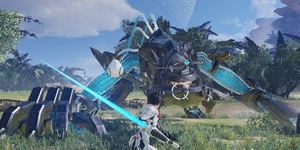 An image of a Nagrus with a Trial indicator

This is a Trial where indicated enemies must be defeated. This can range from large numbers of smaller enemies, to a small number of larger tougher enemies. Bosses can also be the target of these Trials. 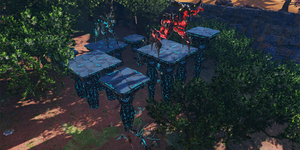 In this Trial, structures referred to as Assembly Points drop down from the sky as well as enemies. Enemies can spawn on top of these Assembly Points, and a "Tether" will spawn in the center of the Trial area, occasionally healing all enemies in its vicinity. Destroying the Tether deals damage to all enemies in the vicinity. 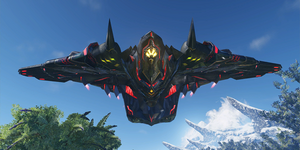 An image of a DOLLS-controlled aircraft

In this Trial, a DOLLS-controlled aircraft appears, spawning enemies below it. The aircraft will attack players below it as well as on top of it.

The DOLLS-controlled aircraft will occasionally fire a laser that will deal damage to player but also heat up the ground, creating an updraft. You can glide on this updraft to get to the aircraft.

Defeat all marked enemies as well as destroy the DOLLS-controlled aircraft within the time limit to complete the Trial. 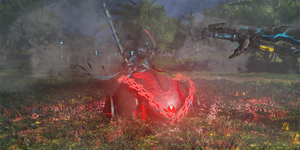 An image of a locked Stellar Gift with DOLLS surrounding it

This Trial occurs when a "Stellar Gift" (not to be confused with Stellar Grace) falls from the sky. This will land in the terrain, and enemies will spawn around it. The Stellar Gift will remain locked until the Trial is complete.

Sometimes, Rappies can replace the enemies that spawn.

Players will take heavy if not fatal damage if hit by the Stellar Gift as it lands. If it lands on an enemy - including boss enemies, it will instantly be defeated.

Defeat all marked enemies within the time limit to complete the Trial and obtain the Ores contained inside the Stellar Gift. 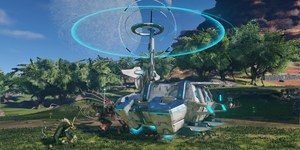 A Defense Trial tasks players with defending a transport truck from being destroyed by several waves of enemies.

When all marked enemies from a wave are destroyed, the next wave will start. During the final wave, a boss enemy will spawn.

Defeat all enemies without allowing the transport truck to be destroyed to complete the Trial. 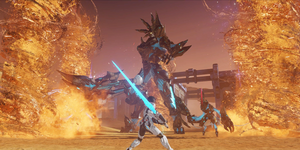 An image of DOLLS surrounded by tornadoes

This Trial only occurs in Retem. Enemies, as well as a boss enemy spawn along with several tornados that follow their own path.

A "Blast Charge Sign" appears next to each tornado that appears as a purple crystal. When collected, the player's Photon Blast is fully recharged and made immediately available. 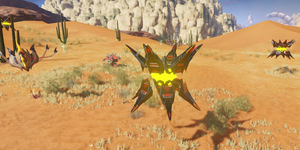 An image of several Transorve teleporter devices accompanied by DOLLS

This Trial only occurs in Retem. Enemies, as well as teleporter devices called Transorves appear.

Defeat all indicated enemies as well as destroy all Transorves within the time limit to complete the Trial.