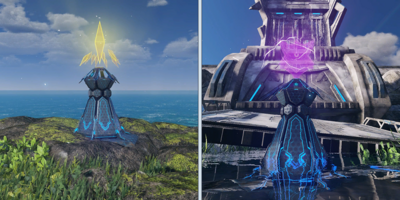 Battledia: Yellow Quests provide a large amount of EXP and enhancement materials for equipment upon completing them.

Battledia: Purple Quests are high in difficulty and feature powerful enemies. Upon completing these quests, you can obtain high-rarity equipment, as well as powerful Special Ability Capsules.

Blue Portals are special Trigger Portals that are only active during certain time periods.

The Battle Triggers you can use and the Quests you can accept from them change depending on the time period.

Quest as part of the 1st anniversary.