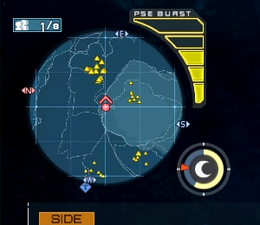 PSE (Photon Sensitive Effect) is a mechanic that only appears in battle sectors. It is represented by a meter that appears on the minimap which shows the current level of the PSE. This will increase in level by defeating enemies in the battle sector and successful trials, but will also decrease sometimes when enemies are defeated.

As the level goes up, the appearance rate of rare enemies will increase, and when it reaches the maximum, a PSE Burst will occur.