A heavy-duty rifle loaded with bullets. Possesses a high rate of attack as well as extreme precision. Its Photon Arts augment its abilities, enabling it to adapt to many battlefield situations. 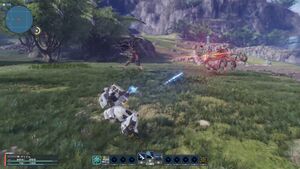 Using Sliding Shot to move to the left

The Sliding Shot Weapon Action performs an evasive slide forward, backwards, or to the sides while shooting at the same time. This allows the Ranger to keep their distance from an enemy to avoid damage as well as shoot at the same time. 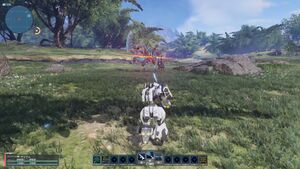 Active Skill. Load a cartridge of bullets that debilitate any enemy part they strike, temporarily increasing the damage you and your allies deal to that part. Main Class only.

Active Skill. Consume gauge built from attacking enemies to fire a short-range payload of bullets that strikes all targets in a wide radius.