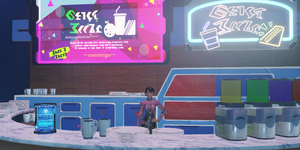 The Food Stand is a shop accessible in Central City's Central Tower as well as Ryuker Devices that allows you to synthesize a temporary Quick Food boost with materials from Gathering.

Quick Food is a mechanic in Phantasy Star Online 2: New Genesis and the game's replacement for the Drink Stand from the original game. By combining different ingredients found from various sources in the game world, players can create custom boost effects that enhance their combat abilities for a limited time.

All Food Boosts last 2 hours and cannot be extended, only overwritten.

Quick Food is a subcategory of collectable material items that can be found out in the game world. Like Minerals, Food sources replenish regularly once collected, or in the case of Meat items can be found whenever the appropriate Tames respawns on the field. There are four categories of Food:

Quick Food can be made at the Food Stand in Central City or at any Ryuker Device. Up to 10 ingredients can be added to a single Quick Food recipe, with varying effects depending on what ingredients are added to the recipe, what types are added, and in what quantities.

Once made, Quick Food is consumed on the spot and lasts for 120 minutes real-time (does not decrease when logged out). The effect cannot be cancelled once activated, although the effect can be overridden by making another Quick Food. After consuming a Quick Food recipe, you can choose to save the recipe as a preset, allowing you to quickly remake it without having to manually select the ingredients.