A large broadsword used for heavy melee strikes. What it lacks in speed, it makes up for in raw damage. The Sword is a jack-of-all-trades weapon, possessing utility in almost any situation and being capable in a variety of areas, however, its attack range is lacking. 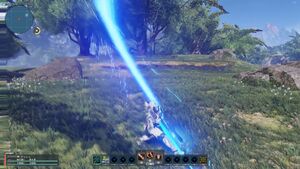 Using the Guard Weapon Action, you can block attacks and negate their damage when Guarding right before the attack hits you. 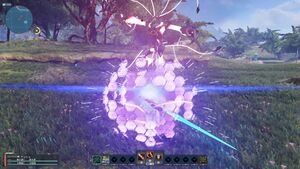 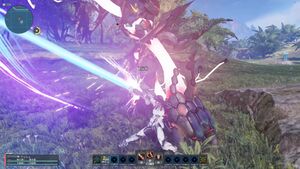 Active Skill. Resets the Hate of all nearby enemies and drastically increases the Hate Generation Rate of the user for a limited time. Main Class only.

Resist a fatal attack with 1 HP and gain brief invulnerability on activation. Does not activate if the user is at 1 HP. Main Class only.

Attacks can be blocked from any direction with a Hunter weapon.

Decreases falling speed while charging a Photon Art with a Hunter weapon.

Increases PA damage if the user is struck by an attack while executing a Hunter PA.

While using a Hunter weapon, using a normal attack after executing the same PA repeatedly automatically activates the 3rd normal.

After successfully performing a Just Guard with Sword Guard, immediately press the normal attack button to execute your 5th normal.