From Arks-Visiphone
(Redirected from A.I.S.)
Jump to navigation Jump to search 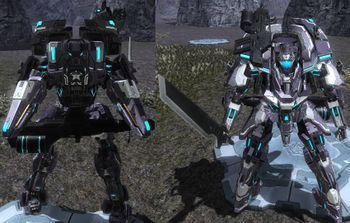 A.I.S. Back and front view

The ARKS Interception Silhouette (A.I.S. for short) is a large, mechanized suit developed specifically for the purpose of Mining Base defense. It is equipped with high-powered armaments that can effortlessly cut down Darker forces, but due to the risk of corruption, its use is limited to short bursts or non-Darker battles. The A.I.S. is white in color by default, but will adjust color according to the primary color of the player's outfit or CAST Parts.

The A.I.S. appears in the following Quests, where it has a time limit:

The A.I.S. appears in the following Quests with indefinite use:

The A.I.S. knows the following Skills by default:

The following Skills only appear in certain Quests:

A counterpart version known as A.I.S. Exoda exists and appears in Mining Base Defense: Demise, Necky's Challenge, and Base Defense Training: VR. They are visually similar to A.I.S., but are red and wrapped in Darker webbing, as well as having Darker Cores on various joints. Exoda take magnified damage from normal players, but resist damage from A.I.S., as well as being able to inflict abnormally high damage to player A.I.S. In addition, they will gain an aura that increases their overall strength when an A.I.S. draws near. Their Darker counterparts of the A.I.S.'s weapons are also able to wreak havoc on both A.I.S. and Mining Bases alike.