The Bouncer (バウンサー, "Bo") is a melee-type Class that is known for its prowess in aerial combat and its capability to weave Techniques into its fighting style. Boasting two very different types of Striking weapons, a Bouncer is capable of both instantaneous support while punishing foes and incredible burst damage, making Bouncer a valuable asset in team play.

Reaching Level 75 on this class will give the following bonuses to the base stats of all classes and all characters of the same account: +20

A twin pair of medium-sized swords. Specializes in rapid attacks that deal minimal damage per individual hit, but hit repeatedly to build up high damage over time. Limited range, but certain Photon Arts can strike from midrange or even afar. Dual Blades can be powered up with the Skill Dual Blades Gear, which allows them to expend Gear built up by attacking to use their Weapon Action.

Dual Blades' Weapon Action is Photon Blades. By pressing the Weapon Action Button, the player will swing their right blade, or fly in a given direction if one is held, while firing a salvo of miniature Photon Blades at targets. The number of Photon Blades fired depends on the Gear Gauge level. When Photon Blades impact a target, the blades will inflict damage while recovering the player's PP. If any player then strikes a target that has been impaled with Photon Blades, they will gain increased PP recovery on hit. This ability can be augmented with Skills such as "Photon Blade Fever" and "Photon Blade Escape".

Mechanized footwear that enables flight. Armed with a double jump, Jet Boots are one of the most mobile weapon classes. They are equipped with both powerful Striking-based Photon Arts while having high T-ATK, and, with Bouncer's innate Technique capability, are capable of alternating between casting Techniques and closing in on opponents on the fly. Jet Boots can be powered up with the Skill Jet Boots Gear, which allows the user to change the active Element of the Jet Boots to adapt to the enemy's elemental weakness; in addition, Jet Boots Gear can be expended to power up their strongest Photon Art, Vinto Gigue.

Jet Boots' Weapon Action is Branched Action. By pressing the Weapon Action Button during Photon Arts, the player will execute an alternate second attack. The properties of this attack vary depending on the base move; some Photon Arts are capable of casting Support Techniques when their Branched Action is used. When used during a normal attack, step attack, or Mirage Step, the player will execute a 4 hit kick combo that has high PP gain. When used without a prior move, the player will perform a flip that negates any elemental changes from charged Techniques. This flip can be chained up to three times. 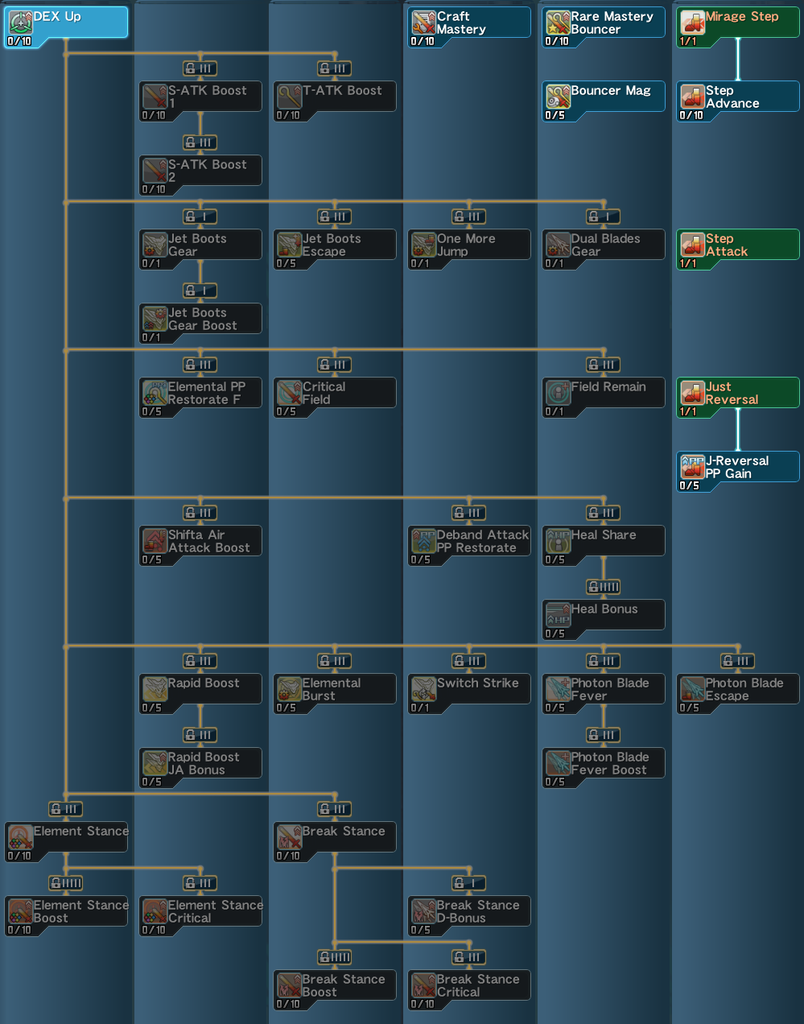 Starting skill. Press the Dodge key to do a fast step that has invincibility. Can be used in any direction.
Note: Performing Mirage Step in mid-air while equipped with Jet Boots will allow you to keep altitude, unlike Step.

Allows you to attack immediately after Mirage Step.

Starting skill. When knocked down, press the Jump key at the moment you hit the ground to get up instantly.

Default Skill. A percentage of your Mag's

DEX is applied to your

Attacking the enemy fills the gear gauge. Using Shift action will consume gear and unleash photon blades that attack the enemy and restore PP.
Normal/Step Attacking targets with Photon Blades stuck on them will gain more PP per attack.
Dual Blades PAs deal more damage with more Dual Blades Gear. In general, the damage increase is 10% at Gear 1, 15% at Gear 2, 20% at Gear 3.

Gain invulnerability when using the Weapon Action on Dual Blades.
Note: Invulnerability only occurs if using Photon Blades with a movement key.

Attacking the enemy and charging technics will fill the gear gauge. After charging a technic, all subsequent attacks will have their elements changed to the element of that technic. Increases damage according to the gear level.
Jet Boots striking damage will increase by 5% between Gear 1 and 2 and 15% between Gear 2 and Max.
At Gear 2, Jet Boots double jump will cause a mini tech explosion based on the current element of the Jet Boots.
Note: The element will not change when charging Resta, Anti, Shifta, and Deband. Compound Techniques, Nabarta, and Namegid will also have no effect.
Note: The neutral Weapon Action will discard the elemental change.

MAIN CLASS ONLY
When equipped with Jet Boots and under the effects of Shifta or Deband, attacking will accumulate gear quicker.

MAIN CLASS ONLY
When an enemy is hit during a double jump, gain an additional jump.
Note: You gain the additional jump if hitting an enemy with a jump tech explosion, normal attack, PA, or attacking weapon action.

When an element is saved by gear, using a Shift action will cause it to burst, dealing damage and inflicting status to surrounding enemies. Only applies if Jet Boots Gear is learned.

T-ATK. Can be activated again to toggle off.

Increases the power of Just Attacks while Rapid Boost is active.

Increases the damage of attacks that match enemy elemental weakness.

Increases your critical hit chance when matching enemy elemental weakness while under the effects of Elemental Stance.

MAIN CLASS ONLY
While using Dual Blades, attacks to unbreakable enemy parts will benefit from a percentage of Break Stance's bonus as though they were breakable parts.

Increases your critical hit chance on breakable parts while under the effects of Break Stance.

Generate a field that moves as you do. Increases critical hit rate of all players within its boundary.

Generate a field that moves as you do. Restores PP of players within its boundary whenever they attack an enemy with their elemental weakness.

Allows players who leave your strengthening fields to maintain their effects for a few seconds.
Currently only affects Critical Field and Elemental PP Restorate F.
This also affects the user, who will benefit from the field's effects for a brief time after the skill expires.

During Shifta's effect, add a damage bonus to aerial attacks.

Recover additional HP from Techniques, Potentials and Items.
Only affects the HP you recover. Other players and Pets will not benefit from this skill

Whenever you recover HP, nearby players will also recover a percentage of the HP you recovered.
This includes HP recovered via Techniques, Potentials and Items.

Increases the statistics of crafted equipment you're wearing.
Does not include special abilities, potentials or set effects.

Main Class Only. Increases damage if equipped with a 10★ or higher rarity weapon.

Whenever you successfully perform a Just Reversal, you will recover a percentage of your PP.

Requires Class Level 85.
Main Class Only. Evading an attack with Mirage Step activates all learned Field Skills. Recast Time does not activate when Field Skills are triggered by the effect of this Skill.