The Gunner (ガンナー, "Gu") class is a specialized Ranged class that focuses on single-target combat and burst damage. Armed with their primary weapon, the Twin Machineguns, and a Skill Tree that rewards close combat and skilled play and use of mobility, the Gunner is difficult to master, but has the capability to shine and exceeds the limits when used to its fullest.

Extremely versatile ranged weapons that serves as the primary weapon of

Gunners. They deal relatively small amounts of damage. However, they make up for it with the number of hits that they can deal in a given amount of time. While TMGs are considered as a Ranged weapon, their hit range is of Medium to Point-Blank range. Twin Machineguns can be powered up with the use of the Skill Twin Machineguns Gear, which grants them a damage bonus as they stay on the offensive and avoid taking damage.

A heavy-duty rifle loaded with bullets. Possesses a high rate of attack as well as extreme precision. Its Photon Arts augment its abilities, enabling it to adapt to many battlefield situations. Assault Rifles can be further strengthened with the use of Bullet Skills, which allow the user to load in special magazines that give their attacks special properties.

These are universal weapons for all classes, which can switch between striking attacks that scale off of 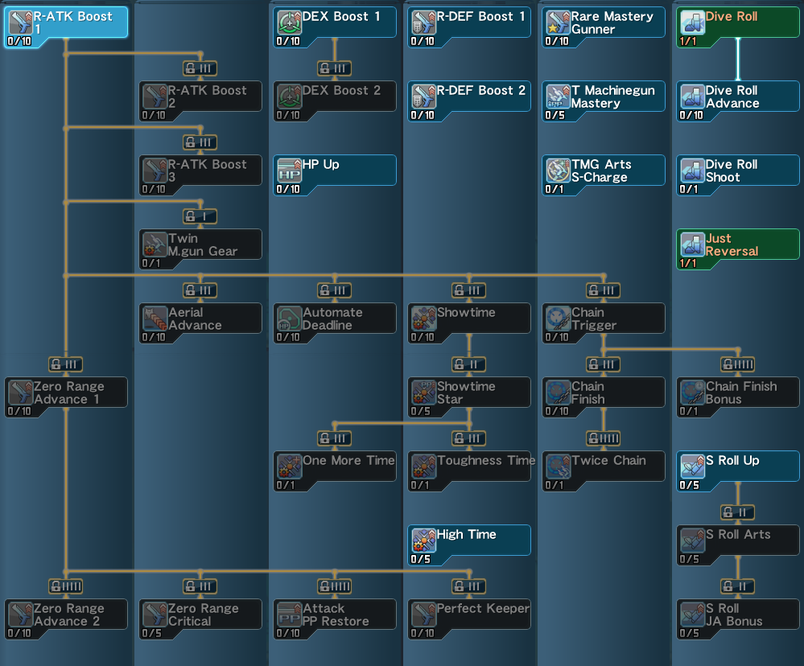 Core Skill. Roll in a desired direction to dodge attacks.

Allows for an attack to be made during a Dive Roll.

Core Skill. Press the Jump button after landing on the ground from knockback to get up immediately.

Main Class Only. When wielding Twin Machineguns, using any TMG Photon Art that requires charging immediately after any other Photon Art or Technique will cause it to charge immediately.

Main Class Only. Gain a damage bonus that increases over time while Showtime is active. Resets when a certain percentage (20%) of your maximum HP is taken as damage during Showtime.

During Showtime, reduces the amount of gear lost on hit. Only takes effect if Twin Machinegun Gear is learned.

If damage was not taken during Showtime, Showtime will be reactivated once.

Active Skill. Enables you to start a Chain. Once you strike a target with any normal attack, a Chain counter will appear. The Chain can be increased by striking it with Normal Attacks, attacks from other players, or uncharged Techniques. Use a Photon Art or charged Technique to initiate a Chain Finish and increase Photon Art/Technique damage against the Chain target based on the Chain value.

Twin Machineguns increase the Chain counter by 2 per hit.

Increases the damage of a Chain Finish.

When a Chain Finish is activated, the cooldown for Chain Trigger will be reduced according to the accumulated chain.

Increases the damage of Ranged attacks performed near the enemy.

Increases the Critical Hit Rate of Ranged attacks performed near the enemy.

Increases damage dealt when HP is over 75%.

When HP drops below 25%, a mate will be automatically used.

During a Stylish Roll, pressing the PA button will unleash a more powerful attack.

Increases the damage of a Just Attack after a Stylish Roll.

Main Class Only. Automatically gained. Increases damage when equipped with a weapon with a rarity of

or greater, or any crafted weapons.

Requires Class Level 85.
Main Class Only. Boost the power of S-Roll Arts and modify its range.