Hunter (ハンター, "Hu") class is a standard melee class. Boasting a varied arsenal of strong Striking-type weaponry and a Skill Tree that promotes both offensive and defensive play, the Hunter class is well-suited for solo play.

Reaching Level 75 with this class grants the following base stat boosts to all class and characters on the same account: HP +50,

A large broadsword used for heavy melee strikes. What it lacks in speed, it makes up for in raw damage. The Sword is a jack-of-all-trades weapon, possessing utility in almost any situation and being capable in a variety of areas. However, it lacks range compared to its other Hunter weapon counterparts. Swords can be powered up by the Skill Sword Gear, which grants them faster charge speeds and a variety of bonuses for staying on the offensive.

Sword's Weapon Action is Guard. By holding the Weapon Action Button, any attacks dealt to you will inflict sharply reduced damage and minimal knockback at the cost of PP.

A pair of blades hooked to handles by an extendable cable. The specialized blades are capable of striking targets far and wide, at the cost of some raw damage. Wired Lances also excel in grappling targets, manipulating their positions and using them to strike other foes around them. Wired Lances can be powered up by the Skill Wired Lance Gear, which allows them to expend Gear built up by attacking to boost the strength of their grapple-type attacks.

Wired Lance's Weapon Action is Guard. By holding the Weapon Action Button, any attacks dealt to you will inflict sharply reduced damage and minimal knockback at the cost of PP.

A long, bladed spear. Despite not having the sheer strength of a Sword, the Partizan makes up for it in its other attributes, with a solid attack speed and great range and mobility with its Photon Arts. The Partizan user can twirl their weapon following the usage of an attack or Photon Art to quickly restore PP, granting them excellent battlefield control as well. Partizans can be powered up by the Skill Partizan Gear, which allows them to expend Gear built up by twirling their Partizan to boost the strength of their Photon Arts.

Partizan's Weapon Action is Guard. By holding the Weapon Action Button, any attacks dealt to you will inflict sharply reduced damage and minimal knockback at the cost of PP. 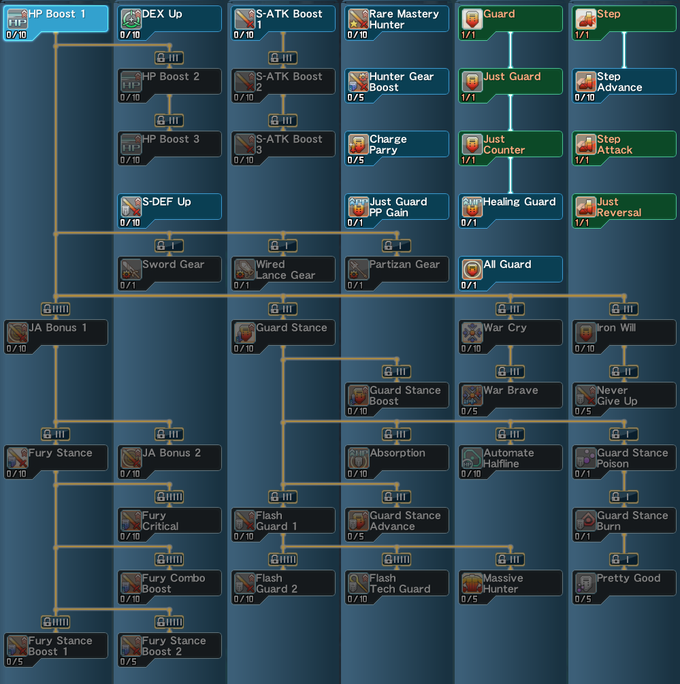 Starting skill. Press the Dodge key to do a fast step that has invincibility. Can be used in any direction.

Increases the invincibility time on Step.

When knocked down, press the Jump key at the moment you hit the ground to get up instantly.

Allows you to attack immediately after Step.

Allows a guard to be performed. Guarding an enemy attack reduces the damage taken.

Allows for a Guard to completely negate any damage if used right before an enemy's attack.

Turns attacks after a Just Guard into a Just Attack.

When performing a Just Guard heal you and all players around you.

Adds in a Just Guard timing to the start of all charged Hunter PAs.

Automatically use a mate item when damaged to below 50% HP. Has no animation.

Gives you a chance to survive a lethal attack with 1 HP as long as you are above 1 HP. Also gives you a brief period of invincibility after activation.

Enhance Iron Will by extending the invincibility duration and increasing your

S-ATK by 200 for 60 seconds. Note: Does not add to Iron Will's invincibility, the cap is 15s of invincibility.

Reduces all striking and ranged damage you take by a percentage.

Reduces all tech damage you take by a percentage.

Taunts nearby enemies and increases the rate in which you gain aggro.

When active, reduce all damage taken by a percentage and completely prevent flinching or getting knocked down.

Reduces the duration of status effects on you.

Consumes a gear bar to increase the power and range of PAs. The power increase is 110%. Gain gear by maintaining Guard or by letting the animation you do after every attack play out. Note: Vol Graptor and Sacred Skewer are exempt from this damage bonus.

Increases the striking and ranged damage you deal, at the cost of taking more striking damage.

Increases your critical hit chance while under the effects of Fury Stance.

While under the effects of Fury Stance, every successive Just Attack grants you a stacking damage bonus, up to a cap of 110%. Note: The percentages given essentially means how much damage bonus you gain per JA. Meaning, 5% means you hit the max in two JAs and 10% will get you to the cap in a single JA.

Active Skill. Decreases the striking damage you receive at the cost of reducing your striking and ranged damage. Also provides you with

S-DEF. Overwrites the effects of Fury Stance while active.

When activating Guard Stance cure Poison on yourself.

When activating Guard Stance cure Burn on yourself.

While Guard Stance is active, when an enemy around you dies, recover your HP.

Default Skill. Main Class Only. Increases damage if equipped with a 10★ or higher rarity weapon.

While under the effects of either Fury Stance or Guard Stance, increase the rate of gear gain for hunter weapons.

Main Class Only. After performing a Just Guard, recover PP.

Main Class Only. Allows for hunter weapons to guard in all directions at once.

Main Class Only. After using War Cry gain a damage bonus and PP recovery bonus based on the amount of enemies affected by War Cry, up to a limit.

Main Class Only. While under the effects of Guard Stance performing a Just Guard grants a temporary damage bonus.

Requires Class Level 85.
Main Class Only. Boost the effect of War Cry and inflict Jellen on nearby enemies upon activation.