Difference between revisions of "User:Ryutensei/Bouncer Guide"

Written by: Ryutensei
Edited by: A Sleepy Knight Rappy
Transcribed by: Nan 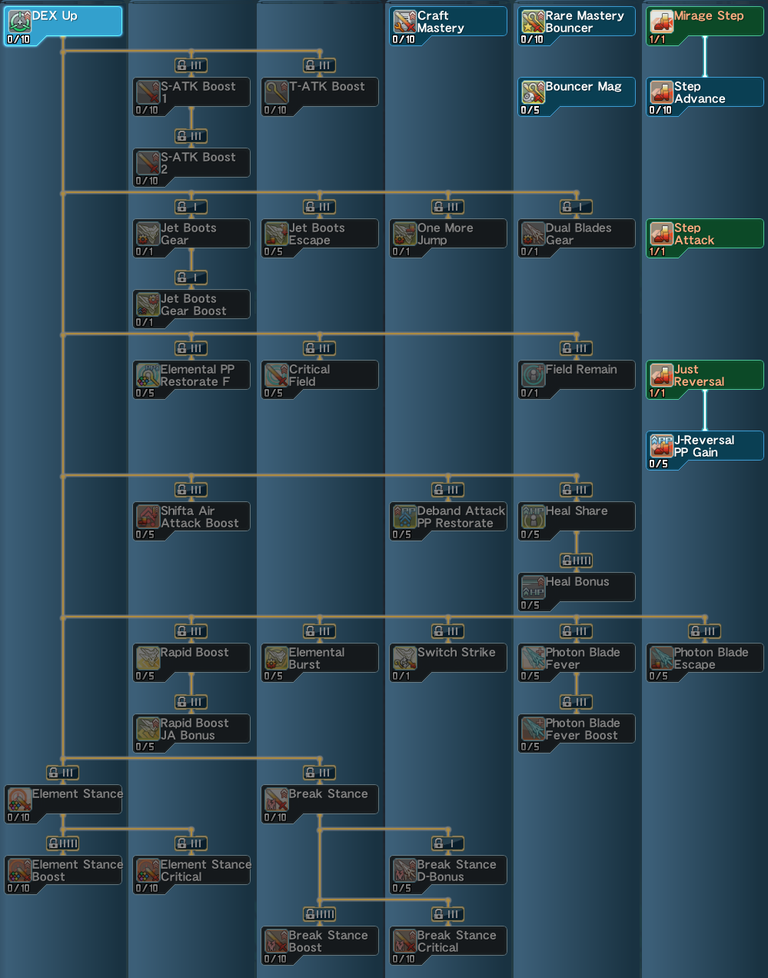 Field Remain - The skill is self-explanatory, it allows others to keep the effects of the field skills Elemental PP Restorate and Critical Field for some time after they leave your range. These skills can tighten up some slack on the downtime of those around you since you have to be in melee range of weak points. Other classes that have this damage dealing range won’t complain with free buffs!

S-ATK Boost{Bouncer#tatkup|T-ATK Boost]] - Increases indicated base stat values by an increasing value maxing at either 50 or 100 total for the more points invested.

Step Advance - Invincibility window increased by a maximum of .20 of a second during step. Bouncer weapons are teeming with abilities you more commonly invest in to do this.

Bouncer Mag/Craft Mastery - Bouncer Mag makes a fixed amount of your Mag’s Dex stat be converted into T-ATK and S-ATK up to 50%. Bouncers commonly use S-ATK mags so this doesn’t do much. Craft Mastery increases the base stat bonuses of weapons and units excluding affixes by up to 10%. This is dated due to the fact you cannot craft over 11*.

Elemental Burst - Passive skill that lets out an elemental shockwave that expends element gained from Jet Boots gear via shift action that deal damage and has a max of 20% to inflict status effects based on element.

L/JB S. Charge - This ring reduces the charge time for technics following any Jet Boot Photon Arts by 50% at most. What this does for Jet Boot Bouncers considering Vinto Gigue, the biggest source of damage for JB Bouncer, not only empties your gear but returns your element to weapon’s current. Instant charging technics following it greatly reduces downtime during DPS phases since technics charge 2 gear with boost.

R/Attack Advance - Increases the damage dealt by normal attacks by 8%. Considering the amount of damage Jet Boot normals deal this ring makes for a nice but minor boost in damage with a minimal amount of effort on the player’s part.

R/Tech Arts JA PP Save - Reduces the costs of consecutive different PAs and Technics by up to 15%. Dual Blade PAs are very costly and this ring can alleviate some of the harsh pp usage on DPS rotations or tighten JB PA rotations for more burst.

L/DB Snatch - Increases the striking damage from moving into enemies during Dual Blade Shift Action by up to 1800%. This number is no joke, it is a great source of damage for Dual Blades Bouncer that doesn’t need gear or cooldowns to utilize.

L/PB Homing - Adds a strong homing effect that can turn on a dime on targets that increases with level. Also adds an 8% damage boost. PB Homing can target things a lot easier and that damage increase on the best tool on Dual Blade Bouncer isn’t bad but because of this the photon blades naturally become slower to home. You want to make sure you’re right up on anything you target to prevent this. Sounds like a great time for DB Snatch to make an entrance.

Bouncer has two weapons that, in play, are interchangeable. These two weapons are Dual Blades and Jet Boots. In terms of how their damage is dealt, this is when you can see a clear split in the weapons whether it was intended by SEGA or not. Jet boots proves to be a better weapon for bossing as dual blades excels in mobbing. However, either weapon can do both. Considering Elemental Stance is the main multiplier Dual Blade users often need to build a rainbow set of weapons of every element to know what best to use in a situation whilst Jet Boots change element on the fly via technics meaning you would need only one on a home element.

Heavenly Kite - Swing your Dual Blade in an upwards spinning motion. Fills gear instantly if all hits are landed. Ideal for filling gear with minimal displacement during DPS phases.

Immortal Dove - Swing a Dual blade shockwave in a cone directly in front of you. Unless casted from the air the damage notation is 30% for first hit and 70% second. When casted from the air it’s a single hit for 100% of the notation. It is the shortest Dual Blade PA as well as the second hardest hitting one.

Justice Crow - Uses your dual blades to draw the image of an ARKS Star that has weak homing and flies towards nearby enemies and explodes with splash damage for moderate damage. Fills gear completely. damage is lackluster.

Starling Fall - Gather blades that’ll launch you in midair away from danger. While this does a shockwave that hits once. The damage is low. This is used for its hilariously long Invincibility Frames for surviving what could be a killing blow.

Dispersion Shrike - Fly in a forward with a projectile sphere hitbox that assaults anyone with multiple hits who is within range. If all hits are landed, instantly fills gear. Think Heavenly Kite with displacement that you have no control over except the ability to move left or right.

Vinto Gigue - Jet Boots PA that charges energy to release a shockwave that resets gear element/empties gear. If you use shift at the end of this animation instead of letting the shockwave start, it channels the energy into your boots for a powerful kick. This is the most powerful Photon Art that Jet Boots have due to its ridiculous notation.

Moment Gale - Jet Boots dash around in the air in slashing frontward motions with sizable AOE before ending in a kick forward. Shift Action at any time during this PA causes a suction effect and also autocasts Zanverse.

Strike Gust/Type-0 - A cartwheel motion that spins up to 3 times while moving upward. Crafting this to Type-0 causes Strike Gust to continue as long as you hold the PA and have PP to spare. The drain is about 10 PP second and the damage exponentially increases after the 7th revolution. Decent gear if you have the spare. Shift action any time during this PA slams with a small shockwave for 3 hits that also autocasts Shifta.

Gran Wave - This is the Jet Boot gap closing PA. Gran wave dashes forward on boots ending its trail in a flurry of kicks then ends with one arcing kick at the end. This Photon Art increases in damage from being up close to its target. If all hits land you gain 2 gear.