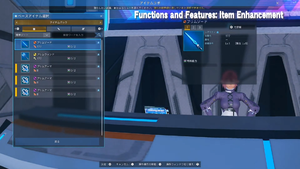 By default, all Weapons and Units can increase their Grind Level up to +20. However, by expending minerals and Meseta, this limit can be increased up to +40, with the limit increasing by +10 per purchase. This limit can further be increased to +50 by collecting and expending Arms Refiner, a material that can either be purchased by exchanging Stragments and Photon Quartz or dropped randomly at extremely low rates.

and lower equipment requires 1 Arms Refiner to unlock, while

Equipment comes with a Special Ability limit cap that determines how many different Abilities that can be affixed to that piece of equipment. Currently, all equipment starts with 2 Ability Slots by default. Additional slots can be adding by Grinding the equipment to +20, +40, and +50.

N-Ability Protection item obtained from recycling items, you can prevent your Ability Capsules from being consumed if an ability fails to be added to the equipment.